The country is, unfortunately, transfixed on and fascinated and/or otherwise perplexed by the former NAACP Spokane Chapter president Rachel Dolezal controversy surrounding her declarations that she is black. Her statements and assertions include misrepresenting on the Chapter’s Facebook Page a black man as her father when, in fact, both of her parents are white.

My interest in Dolezal’s story is not in the racial identity and misrepresentation morass. I’ll leave that to the Twitterverse (#RachelDolezal #AskRachel) and media. But the recent copyright infringement question about the origins of some of her artwork caught my eye.

As HuffingtonPost arts writer Priscilla Frank reported today, Dolezal, … is also an award-winning Mixed Media Artist, according to her art blog. But questions have been raised about whether Dolezal actually created all of her artwork or whether she misappropriated, in at least one instance, the work of another and presented it as her own.

Infringement? No. But there is a strong argument for plagiarism. Review the images and explanations below to understand why and share your thoughts about the issue.

“Rachel Dolezal is an award-winning Mixed Media Artist with over 20 exhibitions in 13 states, internationally, and at the United Nations Headquarters. Dolezal completed her Master of Fine Arts at Howard University, where she majored in experimental studio and minored in sculpture. She has over 10 years experience in community development, human rights education, and intercultural negotiations. She is currently an Art Instructor at North Idaho College, Adjunct Professor of African American Culture at Eastern Washington University, Advisor for the NIC Black Student Association, speaker, education consultant, and exhibiting artist.”

A Comparison of the Works

Below is the image under scrutiny that Dolezal claims as her original, copyrighted work:

Great piece–the second panel of a three-panel work–until someone like Twitter user Jolie Adams schools you on the noted and notable artwork of Joseph Mallord William Turner (English, 1775–1851).

Below is Turner’s “Slave Ship”: 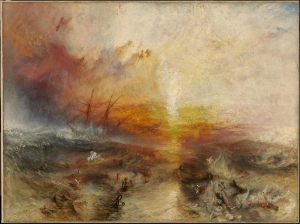 Rachel Dolezal's painting The Shape of Our Kind is a near duplicate of J.M.W. Turner's 1840 The Slave Ship. pic.twitter.com/DGC7GkkPiu

In my humble opinion, they appear nearly identical. Dolezal’s work seems to be a tighter POV of Turner’s painting, with de minimis modifications of color and tone. Commenters knowledgeable about Turner’s work immediately questioned Dolezal’s claims that she created the work presumably without “inspiration”.

But this isn’t a case of copyright infringement. And here’s why.

Turner’s work, presumably created in the U.K. in or about 1840, was subject to the U.K.’s Statute of Anne, which protected writings (not artwork) and empowered authors over publishers of written works. Further, Congress based the first Copyright Act of 1790 in the United States (that protected only books, charts and maps) on the Statute of Anne. So the expanded subject matter of copyright protections as we know them in the 21st century in the United States (for any original literary or artistic work) is vastly different from the limited protections created under the Statute of Anne and Act of 1790.

Secondly, assuming copyright protections applied to Turner’s work, copyright would have long since expired leaving his work in the public domain, “the state of belonging or being available to the public as a whole, and therefore not subject to copyright.” The Statute of Anne only afforded protection for 14 years. You don’t have to know the “new math” to know that assuming any protections could have existed, that proverbial ship has long since sailed.

But there seems to be a strong argument for plagiarism, which occurs when someone fails to properly attribute creative work to the true creator and, instead, intentionally claims part or all of the work of others as their own. Dolezal discusses her “original” creation in an interview with The Easterner.

The lead image captures Dolezal posing in front of the now-questioned piece:

This is the description posted at her art blog:

Triptych with collaborative poetry by published writer, Dr. Josh Dolezal. First Panel: Absence. Second (middle) Panel: The Shape of our Kind. Third (final) Panel: The Return 40″ x 90″ Acrylic on Panel, Beautifully Framed as one unified piece Accompanied by 3 poems that interact in a call-and-response dialogue with the paintings.

No mention of Turner or of “remixing” or otherwise asserting a claim of appropriation art. That appears to be the issue. But given Dolezal’s history of lying about her own origins, it is not surprising that she may have also lied about or misrepresented the origins of “The Shape of Our Kind”.
Remember, it is entirely appropriate to appropriATE a public domain work or even to “remix” existing protected works and transform them into something new. I discuss this concept in my article Sampling, Looping, and Mashing … Oh My! How Hip Hop Music is Scratching More than the Surface of Copyright Law. The public owns public domain works not any one individual or entity. But it is intellectually, professionally and creativity dishonest to claim a previously existing work as one’s own.
Please share your thoughts in the comments section and follow me @IPProfEvans. Thanks in advance for keeping it classy. And relevant.

View all posts by TME

This site uses Akismet to reduce spam. Learn how your comment data is processed.